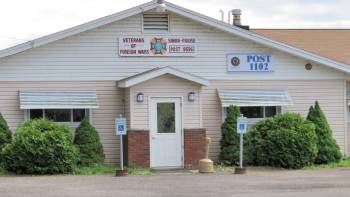 In the fall of 1952, Robert Wright contacted eligible, potential veterans around the Collamer area to see if they would like to start a VFW post. The object was to lend aid through an organization to needy people in this area and to spread a feeling of good will at this time due to the cut back of the veterans' benefits by the Congress. Bob Wright contacted Tom Poole and we were given the necessary material to start signing up members.

Also at this time we needed a name. Names of local people who were killed in action were submitted and the names of Norbert Simon and Michael Parise were decided upon to be the benefactors.

In the spring of 1953, we were installed by the representatives of the Dept. of New York VFW to be a VFW post with the charter to be effective at the date of the National Convention.

Robert Wright was elected the first commander of the Simon - Parise post and Frank Marcellus attended a meeting to present us with our number 9596. Thus, we became Simon-Parise VFW Post 9596 and the post was formed. We held meetings in Kermit Golly's cellar where we were installed until the Collamer school was vacant. At this time we contacted the school trustees to use the former school as a meeting place and the post was to pay all expenses that would be incurred as to heat, etc.

In October of 1953 the furnace went bad and we were forced to look for a meeting hall until we could afford the money to fix the furnace. Sables Inn offered us the dining hall for our meetings, rent free, if we would use the bar facilities; so we spent the winter of 1953-1954 at the Sables Inn. Minds were working overtime to make money and we then planned our first smoker and dance. We contacted the Taft Settlement Grange; they agreed that we could have the hall if we would pay the heat. We held square dances and dropped the smoker for more suitable facilities.

In April 1954 we went back to the school house and the Vets fixed the furnace and put in a small bar. Donations were collected for the former school property and we were off and running. We started

bingo parties at this time and at our first smoker, low and behold someone slipped in a stag movie that was quite an attraction. We had our first Collamer old home day on Chet Wright's land, complete with a portable dance floor donated by Bob Wright. Chet Wright had rides behind his tractor and each member set up his own stand. Syracuse China donated dishes and we had a ball throwing booth, fish ponds, dart games, basketball contest and at night we had a square dance under the stars and thank the Good Lord it did not rain. We had this function two years in a row. The people came from near and far and it made a meeting place for the people that had been moved off the air base.

In the school house we held bingo games, card parties and ice cream festivals to acquire a little money in the bank.

A family here was burned out, a family there was down and out, so we helped these people, and as we did our membership seemed to grow. Then we found out that we needed extra money, so in 1956 we hired Wheelock rides and with the donation of land from Dom Fisher, we had a carnival with rides, a horse pull, and a greased pole with a greased pig in a pen where all the young, fast people could take a chance to catch the greased pig. The pig had other ideas, and made a break for it, and we did not catch him. Later on we were advised that during hunting season the fat little pig did feed a needy family. The generator overheated at the time we were busiest and we borrowed the horse water from the horses to fill the radiator. The ladies grabbed the money for safe keeping and we were able to continue when the generator was re-started. The post was incorporated in 1957 to protect our interests.

In 1958 we held the field days at the school house and the horse pull was held on Waite's land in the rear. This was the year we had the bee's nest in the doorway and no one could get in so we had to get a bee keeper to extract the critters. At this time we raffled the first of many money-making projects. For instance, one raffle was for a rider mower from Porter-Cable, donated at their cost.

These were not the only problems that we had to contend with as the school district was going to sell the school and we gave thought to buying it. At the auction, it was determined that the price was out-of-range for us as the property offered no parking. The Golly store was going to be built and that space was used in place of parking. Commander Charles A. Thompson offered us his garage if we would pay for a cement floor that was needed to make it a temporary post home. Concrete was poured and all the members were there to help. In October of 1958 we held our first meeting there and plans were discussed for a smoker and a turkey shoot. Mike Alura donated his clam shed to use so we had a smoker and a turkey shoot which rejuvenated our income. At this time Doris Thompson, Alternate VAVS representative at the VA Hospital, asked the men if we would have an open house for the VA Hospital patients that wanted a day in the open. We agreed and the VA patients day was started and this is still a yearly function of our post. With the exception of the first party, the people from the VA Hospital were so happy to find people that cared that they weeded the Commander's garden. We had our boat raffle here that gave us a building fund. Our chicken bar-b-ques were a drawing function and we had the first "Women's Lib" out-house, as there was only room for one.

The first family picnic was held at the garage and we now were discussing a permanent post home. It was in the spring of 1959 with the leadership of Commander Charles A. Thompson (who was our post Santa Claus at the VA Hospital for so many years) that we voted to accept the offer of Charlie Mengel for the land on Taft Road for one dollar for a lot 150 by 200 feet and started the necessary paper work to mortgage a building. As the land was low, we had to fill it in first and William Sweeney and Norm Stevenson donated the fill. Dick Markowski donated his truck and loader along with Tex Gardener and Ray Kirsh and with Bud driving, the members hauled in the fill. We had to buy the blocks and hire a member that was out of work to lay them. The members worked nights to complete the blocks and we had a wall. Trusses were brought and layed in place and were covered with plywood. When the school was sold, Dorn Fisher said he would put on the roof and Mr. Fisher furnished the felt paper shingles and nails. Carl Salze put in the floor and Harold Soltau laid out the partitions after the plumbing was installed. Rudnick put in the floor tile and we had a building. Donations of kitchen sinks, pots, pans, and stoves came in and we were ready to have our first installation in our own building. We had to replace and reroute the plumbing system, and Joe Gratzer donated his back hoe and piping was done by members. While the building was being built, we had to run the power across the road from Royal Benedict's home until our own power was hooked up. Bar was constructed and we had volunteers from 7pm until closing, with Fritz Diriwacher opening up at 3pm.

To offset the cost, we had a series of chicken bar-b-ques, field days, and clambakes. The pitch games were on Wednesday night and the post was the meeting place of members and friends. The VA patients and the senior citizens parties with the Ladies Auxiliary helping the members all the way.

In 1968 the dedication of our new building was held and our Gold Star Mother, Mrs. Simon, and the Parise family were present.

In 1971 Commander Clyde Martineau and the members decided that the post should look into the possibility of increasing the size of the building. Plans were made and the new bar was born. Chuck Teller was to be the building chairman and Frank Herbert was to be the building supervisor. And along came donations of lumber from friends to be used for concrete forms. Blocks were laid and the plumbing was installed by the members and friends. Fill dirt filled the forms and we were ready to lay the cement pad. Concrete drivers donated their time to deliver the cement after hours, and two masons donated their time to finish the floor along with the members. Walls were erected and the trusses were put in place. The outside finish plywood donated by Charlie Mengel was stained and installed. The inside panel donated by friends was installed and the post bar was built. With plumbing and electrical installed by members, the heating was installed by Jim Magillis as a donation and at material cost. Bec Electric donated the light fixtures, and along with floor tile donated by Frank Brockway, was installed by members. Also at this time the members installed the ceiling.

When the construction of the Watertree apartments was started, the truckers wanted a place to dump the excavated dirt, so fill was acquired for our post and Tobin Construction leveled the dirt fill.

With the death of our member, Captain William Havener, at Camp Drum, was born the Captain William Havener Memorial Park. It was at this time that our friend, Mr. Charles Mengel, donated more land for our park. With the donation of equipment, manpower, seeds, straw, flowers and shrubs, we were able to build a lasting memorial for Captain William Havener. Dedication of the park was high-lighted with a fly-over by Captain Havener's former Air Squadron; i.e., " The Boy's From Syracuse".